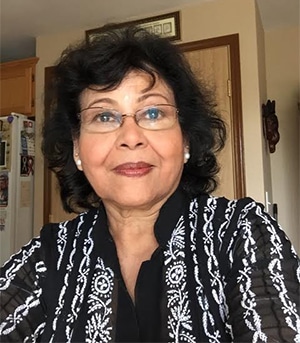 In my mother’s kitchen, I found the answers to all my curiosities. I was lured not only by my mother’s love, but also by the fascinating rituals she performed daily in her kitchen.

From a very young age, I have vivid memories of watching my beloved mother, Rani Sharma, cooking with such passion, exquisite care, and attention to details that even the simplest dish would be her “best”.

Traditionally, meals are very simple in India. While the elements that make up the meals can be described as “simple”, Indian women often excel in creating simple dishes which are complex and exotic in flavor, texture, presentation.

Much of this transcending from simple to exotic is based on the use of spices. I have been cooking meals since I was 9 years old, and although my own affinity, love and passion for cooking feels as though it came naturally to me, I know that I was greatly influenced by my mother and also because I was fortunate to be born and brought up in Delhi.

Brought up in a traditional and culturally rich home, having faith in my own individuality and uniqueness in creating these blends, I am quite confident, that with little imagination, anyone can discover their own fantasy in creating some wonderful dishes with their own personal touch.

Delhi has been a celebrated center of Indian royal haute cuisine for centuries. Except for brief periods, Delhi has been the capital of a country which is a mosaic of incredibly diverse cultures and sub-cultures, with each having its own cuisine, style or variation: if “cuisine” is used in the singular, Indian cuisine is arguably the most varied in the world.

My curiosities, combined with exposure to amazing foods prepared by master chefs from these diverse cultures, helped to form my own cooking style.

After teaching for City of Kent Parks and Recreation over 26 years, I finally called it a quit last Fall, 2017. Now I hold custom made private sessions on Indian Cuisine.

I have resided in Kent/Des-Moines (a suburb of Seattle) WA past 51 years. It did not take long after my arrival that my cooking became known to people locally and in surrounding areas, with articles about it appearing in newspapers in Seattle and elsewhere.

I began receiving invitations to conduct workshops on Indian cuisine, as well as requests from organizations to participate in annual fund raising events.

Because my food and cooking expertise was not derived from formal training, I still consider myself an “amateur chef”. My expertise is wholly derived from the countless hours of pleasure and sheer joy I find in cooking. “What is learned with pleasure is learned full measure”, as the adage goes.

At Saffron Cuisine and Spices we ensure our customers’ privacy. You can be confident that my company does not sell or exchange email addresses with third parties.